We recently received a wonderful call from Rob, near Andover, who – together with his wife – successfully managed to give up smoking 12 years ago with the Hampshire stop smoking service and have stayed smoke-free ever since!

Since giving up smoking in 2007, Rob and Deb have treated themselves to wonderful trips abroad, using the cigarette money they saved, as well as a buying their own hot tub!

“I thought it would be impossible to give up smoking”, Rob says. “I used to smoke 30-40 cigarettes a day. Between the two of us we’d be spending over £1,000 a month just on cigarettes if we still smoked – that money is just literally up in smoke. So we decided to do something about it.

“I had smoked since I was 15 years old, and I finally decided enough was enough. I had to give up for my health. I didn’t want to shorten my life prematurely, so we decided to seek help from our local stop smoking service.

“The first week was tough, but having support there really helped me. I took Zyban tablets – and after the first month I found it surprisingly easy! I’d tried in the past about 9 times to give up, but this time, with free local support, I finally did it.

“One of the best things about stopping smoking is the freedom it gives you. We have more money and more time. Before, I wouldn’t go on a plane as I wouldn’t be able to smoke. But as soon as I stopped I could go anywhere! I felt 100% better, health-wise, and it meant my wife and I could suddenly go on lots more holidays with our three boys.”

Since stopping smoking, Deb and Rob have been able to travel the world, with trips to Florida, Egypt, plus skiing in Switzerland and Austria, as well as to Rome, Venice, Barcelona and New York – most of which were paid for by the money saved by not buying cigarettes. They also did the trip of a lifetime from Las Vegas to San Francisco and LA – something they didn’t think was possible 12 years ago.

“It gives a real sense of freedom – you can go anywhere, stay anywhere and breathe easy. It made me able to take on bigger challenges too, as once you’ve managed to combat nicotine addiction you can combat anything! Just keep taking the medication and get through the first month – then you know you can do it.”

Deb and Rob have also been able to swap their would-be cigarette money for a new hot tub, as a celebratory gift to themselves!

Huge congratulations to Rob and Deb, who have both truly changed their lives since giving up smoking. We all look forward to hearing about your next adventures! 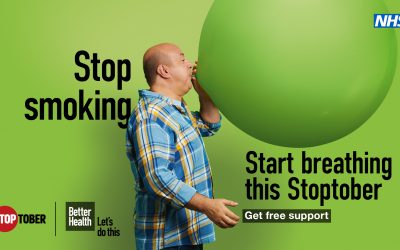 There is no better time to Quit Smoking for good than Stoptober 2021! Smoke Free Hampshire are encouraging smokers in Hampshire to stop...

END_OF_DOCUMENT_TOKEN_TO_BE_REPLACED

You can download a copy of the Stoptober 2021 newsletter by clicking here or on the image below:Recent NewsWhy Quit Smoking How to Quit...

END_OF_DOCUMENT_TOKEN_TO_BE_REPLACED

You can download a copy of the August GP newsletter by clicking here or on the images below: Recent NewsWhy Quit Smoking How to Quit...

END_OF_DOCUMENT_TOKEN_TO_BE_REPLACED

How to Quit Smoking